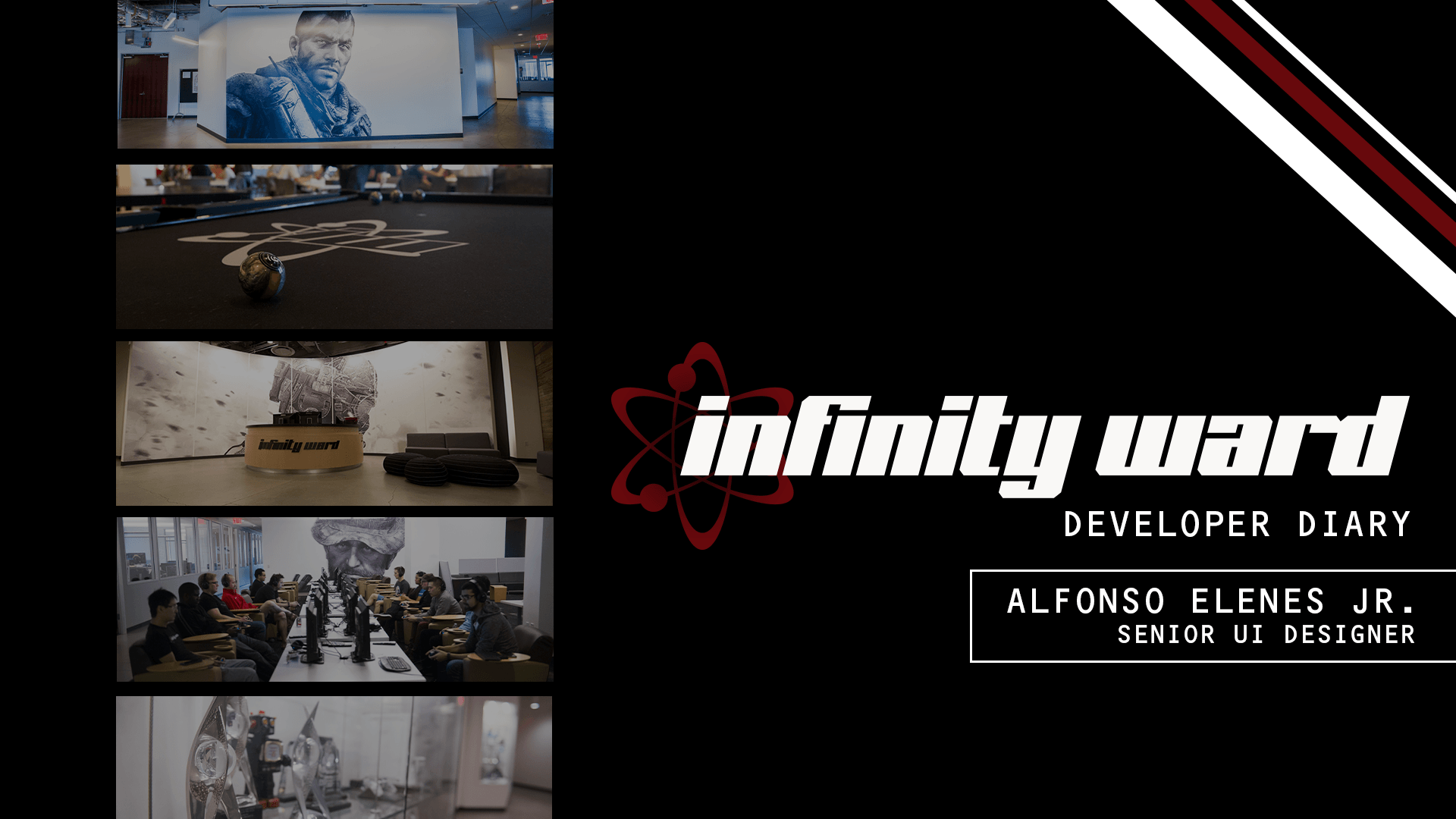 In this installation of Infinity Ward Developer Diary, we get to know Alfonso Elenes Jr. - Senior UI Designer. With 15 years of UI development under his belt and a diverse professional background - he wears a number of hats at the studio. Check out his journey into game development from swapping majors in college up to joining the Infinity Ward team at the Neversoft merger.

I’m part of an amazing User Interface (UI) and User Experience (UX) team here at IW, and I help in the development of the UI and UX for our games.
I typically work closely with engineers and other designers on anything from in-game features, and heads up displays (HUD), to frontend menus. My focus and contributions change based on where we are in game’s development cycle.

During pre-production, I can be working on anything from improving or establishing workflow pipelines and documentation, creating prototypes, to working on greenlight presentations and style guides. While in full-on production, I’m usually working on implementing and maintaining UI features, documentation, and helping with monitoring UI performance…

I’ve joined Infinity Ward in Sep 2014, through the Neversoft merger. I’ve been a UI developer for about 15 years now.

I originally went to school to learn Graphic Design for advertisements but transferred to Game Design about halfway through my degree. What kid doesn’t want to work in video games, right?

I quickly gravitated towards the UI Design portion of the Game Design curriculum. I was able to utilize a lot of the skillset that I learned from the Graphic Design course there. I enjoyed working on UI so much, that I decided to make a career out of it, and I’ve been doing it ever since.

After graduating with a BA in Game Design, I was lucky enough to get a gig as a Flash Developer working on e-learning courses for e-commerce and certifications. The courses would range from office ergonomics, food safety, to airport security. It was cool, I learned a lot about working with multi-media, collaborating with multiple departments, and scripting.


My first actual game gig, was with a startup company named Cheyenne Mountain Entertainment (CME), working on the game Stargate Worlds. It was an ambitious project to say the least, and it was a humbling experience to work with so many talented people. The game unfortunately would go unreleased.

After CME, I worked for another startup company named Big Bang Entertainment (BBE), and we worked on porting Sony’s game, Free Realms from PC to PlayStation 3. The team size was small at BBE, yet highly efficient. I became a more well-rounded UI developer thanks to my time at BBE.

After BBE, I accepted a position with High Moon Studios (HMS), to work on Deadpool, Transformers: Fall of Cybertron, and Call of Duty: Ghosts. My time at HMS was bittersweet, I had the privilege to work with some amazing people, and I made some great friends.

Other than playing video games, and watching movies?

I love product design and tend to geek out when I see examples of cool and interesting designs, regardless where it comes from.

I have a collection of books that I browse through every now and then to help keep the creative juices flowing, and to help stay inspired. I have books on industrial design, graphic design, typography, iconography, animation, as well as art books from movies, games, comics, and artists…

I’m also fascinated with how the human mind thinks and learns. Occasionally I brush up on topics like Social Psychology and Neuroscience.

Tell us about some work your particularly proud about!

I have a few pieces that come to mind, one being the System Hack scorestreak from Call of Duty: Advanced Warfare. It was great! It was like something out of the movie Hackers ( by the way, greatest movie ever made ). It was exploitable, and eventually got nerfed, but for a period of time it was beautiful! The second was the Jackal HUD from Call of Duty: Infinite Warfare. Flying around in the Jackal and switching modes while engaged in dogfights in space was just remarkable!

The last piece would have to be the Store in Call of Duty: Modern Warfare/Warzone. Although it maybe odd to pick a Store to be “most proud” of, but it really is. I love browsing bundles, getting free gifts, and finding awesome operator skins or blueprints. The celebration when purchasing a bundle is pretty rad too!

Have a passion for the craft!

Having a passion for what you do will take you a long way and help get you though some difficult aspects of this kind of work. There’s more to UI development then making the screen look pretty, and if you really want to go down that rabbit hole to see how deep it goes, you’ll need that passion to endure the journey.

Programming isn’t that intimidating once you get used to it,  I really wish I got into programming earlier than I did.

With so many resources readily available online, I don’t think it’s ever been easier to approach and pick up.