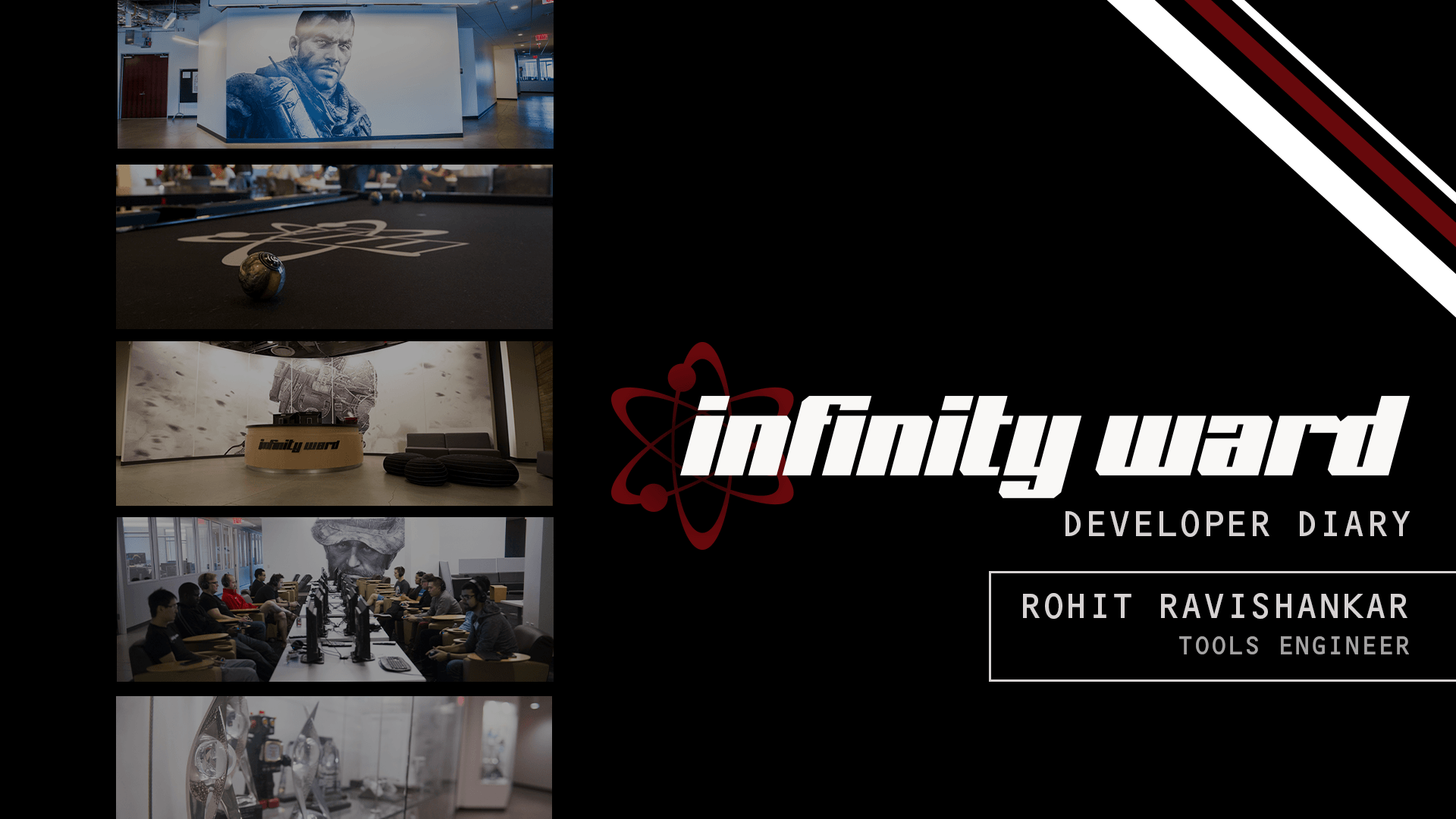 In this weeks installment of Infinity Ward Developer Diaries, we get a peek behind the game with a profile of Rohit Ravishankar, Tools Engineer. Keep reading to learn more about how Rohit develops tools that our designers and artists use to make games like Modern Warfare and follow his journey into Game Development from Dubai to Los Angeles!

My name is Rohit Ravishankar, and I'm a Tools Engineer at Infinity Ward.

I am responsible for building and maintaining tools that artists, designers and technical artists utilize to make the game. These include level editors like Radiant, asset browsers and programs for authoring VFX, animations and previewing 3D models. As a result, I work closely with content creators to evaluate needs, identify goals, and implement them in a timely manner in order to facilitate the creative production process. In addition, I also work with producers to ensure that outsourcing artists are fully supported throughout the project, as far as the tools are concerned.

Any modern AAA title contains an immense amount of data, and Modern Warfare is no exception. A typical build of our game for a single platform and language is over 1.5 TB in size. This is spread across half a million individual game assets, and countless textures, sound files, animations and 3D models. Managing all of this data can get pretty challenging, and I worked on optimizing some of these data pipelines in order to be able to efficiently package builds of our game that go on the disk and subsequent title updates and patches.

I joined Infinity Ward in the summer of 2017 as a part-time intern while pursuing my Master's degree in game development at the University of Southern California. The studio was just ramping up on Modern Warfare at the time. This was my first real job and I was incredibly thrilled to be working on a franchise that I worshiped as a kid.

I decided early on in high school that I wanted to be a game developer, specifically software engineering in games. This was partly because I was fascinated by PC hardware in general (PCMR!), and loved gaming. To this effect, I got a Bachelor's degree in computer science in Dubai, which is where I'm from, before moving to Los Angeles to pursue my dream of becoming a game developer.

After countless rejections and disappointment, I finally got a break when Infinity Ward reached out to me in the summer of 2017. Three grueling interview rounds later, I finally made it to the games industry and nearly 3 years later, I haven't looked back.

My main source of entertainment is going for metal and rock concerts. As far as hobbies go, I enjoy playing the guitar, traveling, photography, and believe it or not, playing video games. A lot.

What have you been working on recently?

As I mentioned earlier, we have a LOT of assets in Modern Warfare. One of the things that I've been working on recently is optimizing the pipeline that converts all our raw sound assets into compressed platform specific audio files in order to minimize the turnaround time to make builds of our game. This lets QA test more builds of our game in a week and potentially find more bugs, so we can fix them before updates or patches go live.

Focus on personal projects. Most candidates who have a computer science or game development degree have completed similar courses, so if you really want to stand out from the pack of applicants, it's important to demonstrate something that is truly your own, no matter how small the project may be. As usual, C/C++ knowledge is indispensable if you want to work on low level, high performance systems. Be nice to others!

I wish I had started working on personal projects earlier in my life when I had plenty of free time instead of, you know, playing video games.