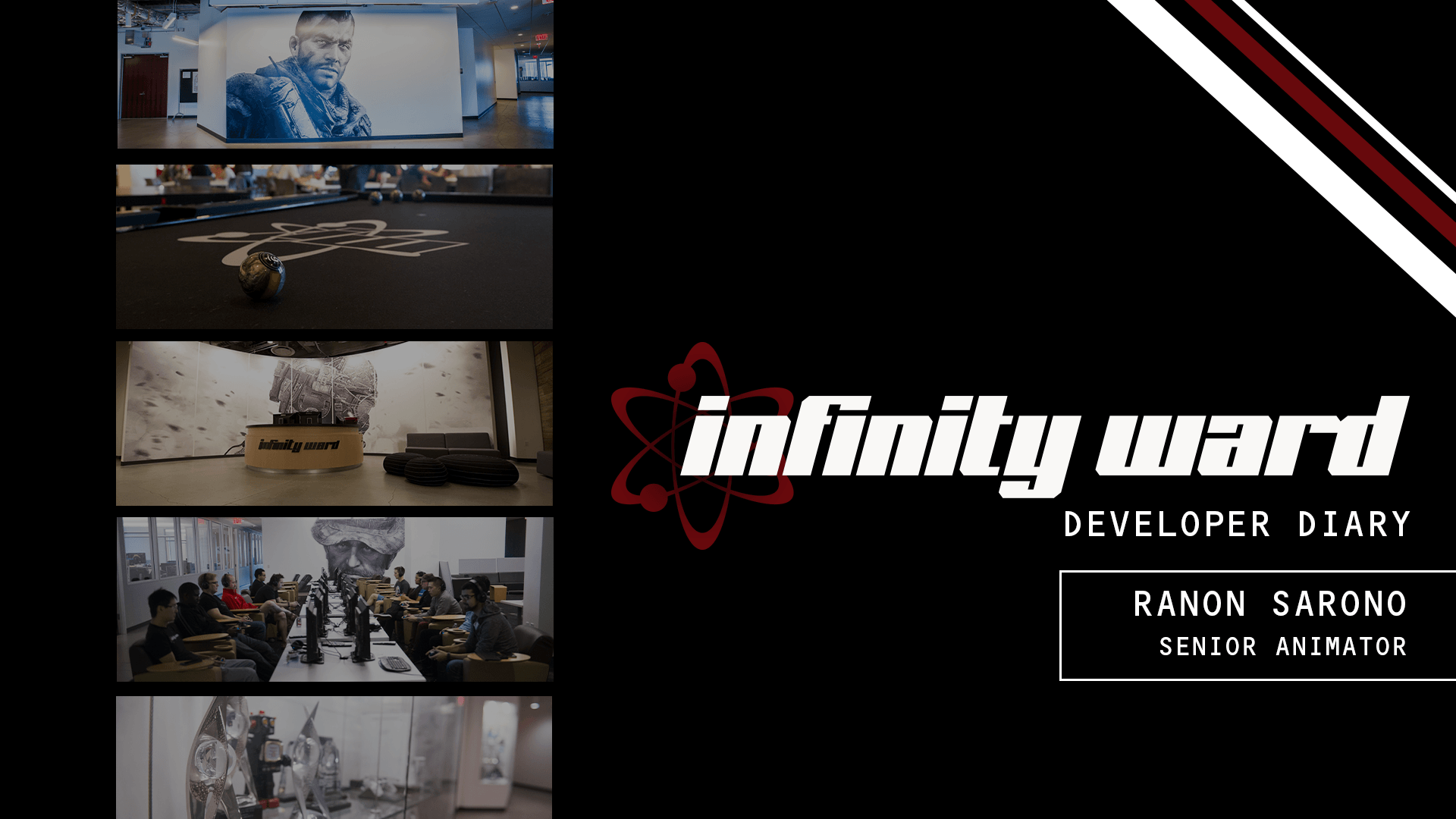 This week's Developer diary is with Ranon Sarono, Senior Animator. While some of you may have seen his animations on Twitter or YouTube, he is also responsible for animating weapons in Modern Warfare. Keep reading to learn about the weaponwork he's most proud of and for some advice on getting into Animation.

Who are you? What do you do @ Infinity Ward?

My name is Ranon Sarono, and I’m a Senior Animator at Infinity Ward.

I work on animating weapons in Modern Warfare to make them feel satisfying and powerful to use in gameplay. A lot of my time is spent on experimenting, working with designers, and putting into practice making a character’s movements feel good while operating a weapon. Some of that process includes everything from finding the best weapon silhouette for the player’s view, to extenuating those small single-frame details that people don’t always notice. In the end, all these little things come together to create a huge and satisfying pay off.

I joined Infinity Ward in April of 2018.

The path of 3D animation started in high school where I discovered 3D modelling and animation software online. From there I taught myself through much trial and error and began to work on small video game mods as a hobby. During this time, I would frequently upload videos of my animations online for people to see.

While in college, I was still animating on the side and continued to show off my work online. Eventually I caught the attention of many studios, and namely our animation director Mark Grigsby (a huge inspiration for me!) who at the time was working at Respawn Entertainment. I left college and landed a job there, shipped my first title in 2015 and have since moved over to Infinity Ward.

Outside of work I spend time with my friends, playing video games and music, helping out with my church and watching anime which me and my fiancé love to do! Lately I’ve gotten into creating shadow boxes. Basically, you print and cut out layers of a picture to place inside a special picture frame and offset them to give off a 3D effect. I think one thing I’d like to do is learn how to cook...I should probably get on that one soon!

The one piece of work that I’m most proud of animating would have to be the MG34. There are so many ways to approach an animation. Never have I animated something with so much weight and small details. As an animator you have to consider weight, timing and pacing among many other things. The challenge of it all creates such a fun process and seeing it all come together in game is such an awesome feeling.

Don’t wait to learn. You can start right now by just going online to download some 3D software and start using it. Seriously, there are so many animation rigs, helpful guides, tutorials and books out there. Don’t be discouraged if your first animation looks bad. We’ve all been there, but you have to just push through it. Gather inspiration, references (anime is a huge one for me!) or anything you can think of, even if it’s you recording yourself doing an action and breaking down why and how your body moves the way it does. Have fun with it.

Animating weapons was the one thing I focused on while starting out. That wasn’t necessarily a bad thing, however I feel like I hindered my ability to animate full body characters and to understand body mechanics and the like. While I do have experience in animating full body characters, it’s so much more challenging. However, that’s also what makes it a ton of fun!