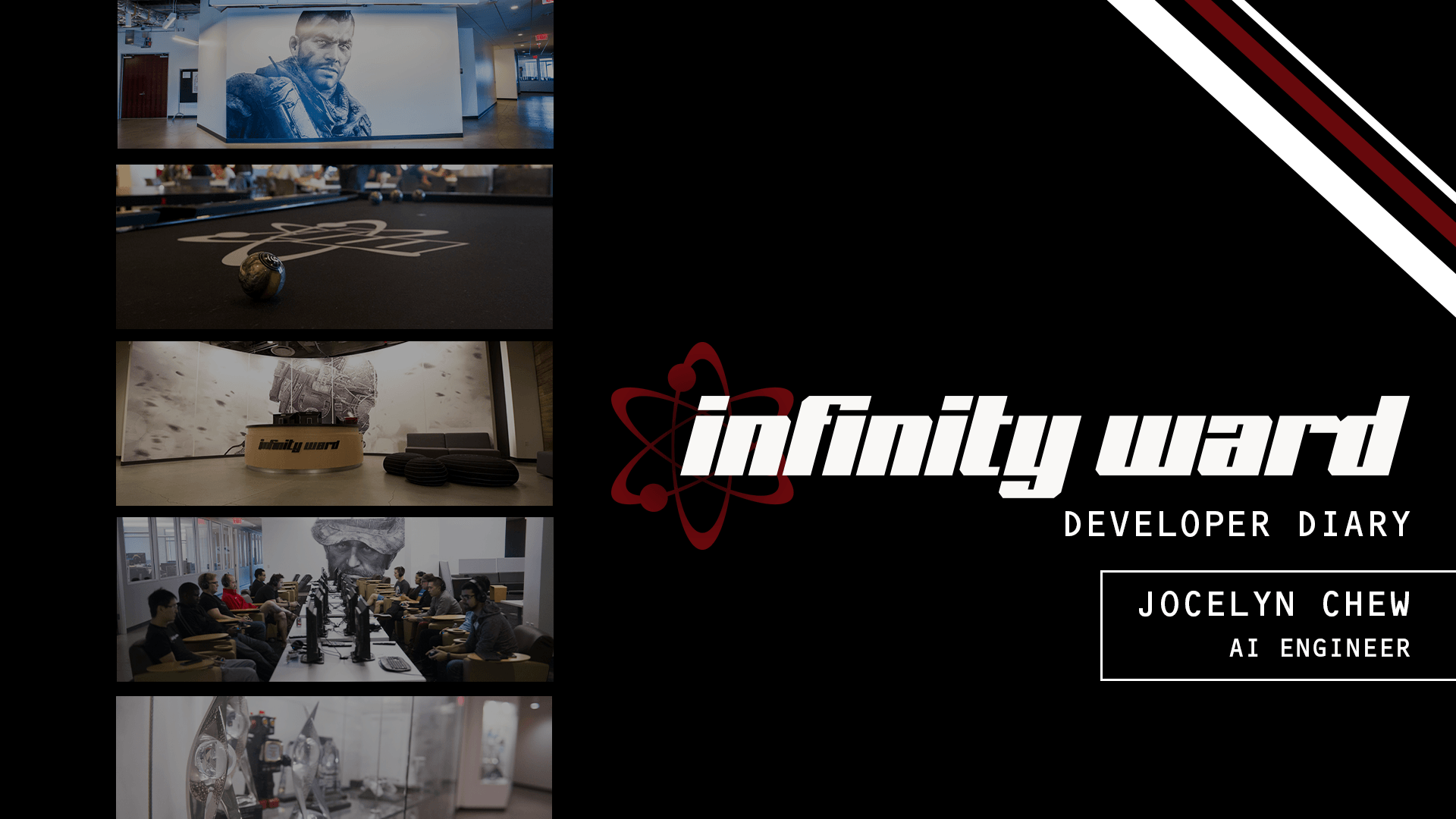 In this week's Developer Diary, we get to know Jocelyn Chew, AI Engineer. Keep reading to hear about how her work directly effects the behavior of enemies in some of your favorite missions like "Going Dark"!

My name is Jocelyn Chew. I am an AI engineer here at Infinity Ward.


The AI engineers are responsible for any character on the screen that isn’t controlled by a player. We coordinate with designers to implement and refine the behaviors of enemies, civilians, and the occasional dog – whom they shoot, when they hide, where they move, what they respond to, how they understand the world around them. We provide designers with the tools they need to tailor the AI to particular levels and implement the systems necessary for the AI to act intelligently in a level without specific directions.


We also work very closely with our animators to get the AI moving and interacting with the world in realistic ways, from how a Tier 1 Operator carries his weapon to how intently an ally can look at the player without getting creepy.

I started at Infinity Ward on Modern Warfare 3 in 2011. My first job out of college was in the games industry, working on a college basketball game. Since then, I’ve worked on a racing game, a game based on a pen & paper RPG, a Star Wars game, an open world game, an XBLA arcade game port, and now, Call of Duty.

When I’m not gaming for fun, you can usually find me gardening, baking, or crafting.

Tell us about a recent piece of work you are most proud of.

The stealth systems seen mainly in the Going Dark mission of the campaign underwent quite the overhaul in Modern Warfare. Not only did the AI get all-new animation sets to better convey their state and reactions to the player, but we also added reactions to more events, light-based gameplay, hunting behaviors, the ability to disengage, and non-linear progression through the level. It was a long, highly iterative, and ultimately rewarding collaboration between animation, design, and me, as well as with feedback from developers all over the studio, to shape an intuitive and engaging stealth experience for the player.

What advice would you give to someone wanting to get into AI Engineering and games?

Play lots of games! Take your time to explore the systems that games present to you, do what you can to dissect them and see how they tick. Understand their limitations and why they might exist. Look for the fine details you might only notice upon closer examination.


Yes, yes, you need some fine technical chops, too, but there is no piece of a good AI system that exists in isolation. A good AI engineer understands how each action fits into the larger picture of an AI’s overall behavior, and how they interact to form a system greater than the sum of its parts.

What have you learned about working in AI now, that you wish you knew before?

No one really cares how “smart” an AI is. A high-fidelity human AI is “good” if it meets a player’s intuitive expectation of what a reasonable human being would do in a given situation, and that is often subtle and complex in ways that have very little to do with how well an AI can outsmart a player.