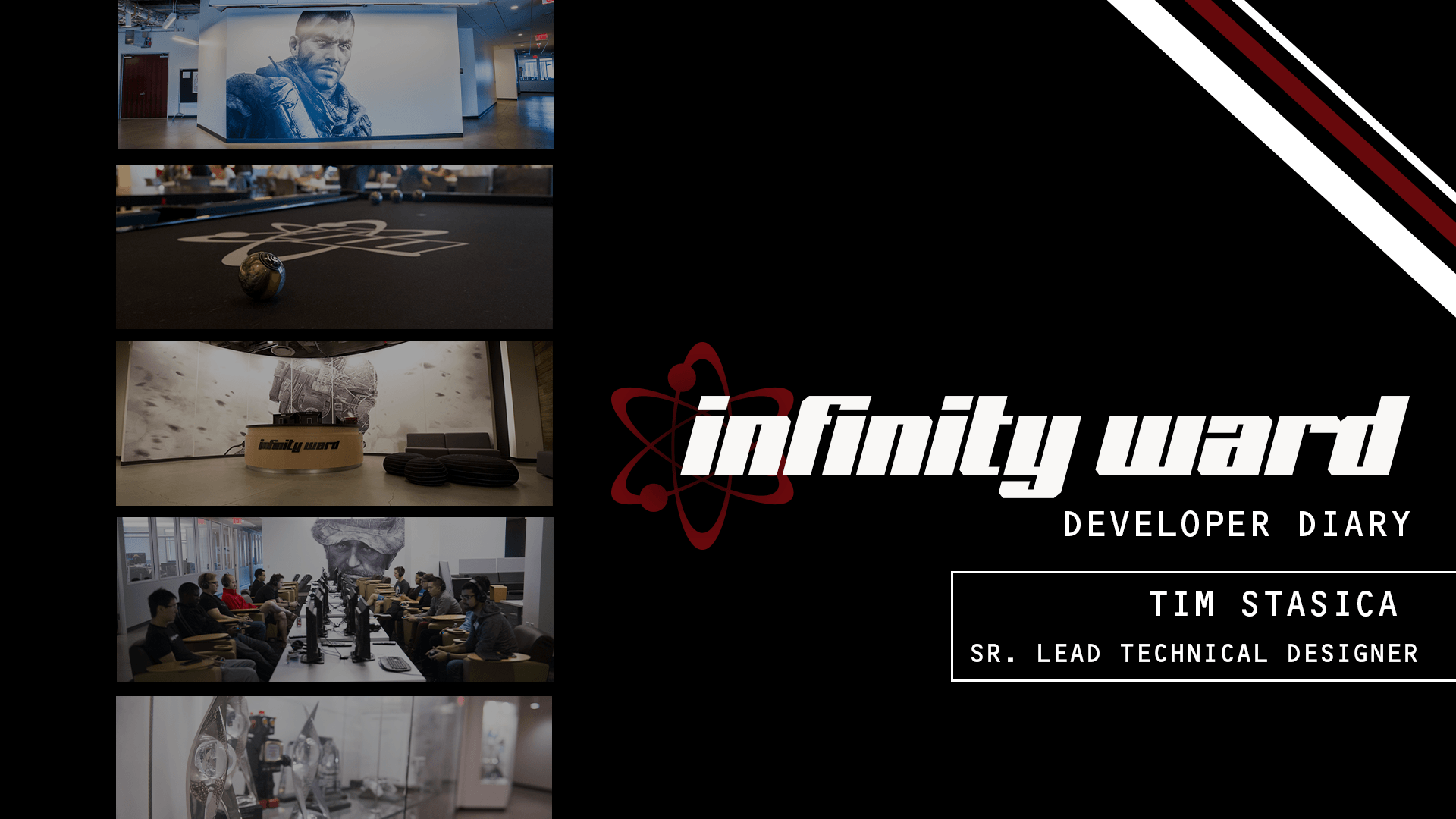 In this installment of our Developer Diary series, we meet up with Tim Stasica, Senior Lead Technical Sound Designer. As a part of our Audio Team here at Infinity Ward and a 13 year veteran in Activision, he has had a hand in the creation of some of the memorable audio and sounds across a number of projects including Modern Warfare.

Who are you? What do you do @ Infinity Ward?

I’m Tim Stasica. I’m the Senior Lead Technical Sound Designer – which is way too wordy. I record and create sounds which play in the game but also am heavily involved in the technical aspects of implementation and systems for playing sounds in the game.

I joined IW at the Neversoft/IW merger, and have been at Activision for 13 years now. Before Neversoft, I worked for High Voltage Software in Chicago. I originally got into games as a composer and learned sound design on the job. I quickly realized how repetitive and time consuming a lot of implementation tasks were and a friend of mine in IT helped me learn VBS and I started scripting tools for myself and the audio department.

I just got married last fall – at the same time that we were finishing up Modern Warfare – so that was a kind of fun/exciting/insane whirlwind of activity. My wife and I like going hiking, camping, and on foodie road trips when we have time. We also have a dog and have gotten involved in scent training competitions – we’re all pretty competitive and she (the dog) has taken home first place at a few scent trials.

I’m really proud of all of the awards and accolades that the audio in Modern Warfare has received. That is a full team effort – you don’t see any bad games getting nominated for best audio awards, so it’s a testament to how great of a game and team this is. All departments are so heavily intertwined – design, animation, visual FX, engineering - anyone can help or hurt the audio experience, so getting any of this notice is a great sign of how well departments are working together here.

There is so much in the game that I’m proud of. Our Principal Sound Designer Stuart Provine is our weapon sound expert, and his push for accuracy and new features on weapons has been amazing. There’s so many intricacies in our weapon sounds – something that always makes me happy is shooting out a window or door and hearing the distant echo of your gunfire still playing out the window as you move away from it. I love hearing shell casings bounce off several different material surfaces after they eject from your weapon.

I was really lucky to get into the game industry the way I did. For most people interested in working in game audio, getting your foot in the door through QA and internships is the best way for younger people. We have a couple fantastic audio QA people at Infinity Ward now, but it’s an area that is often lacking and audio departments sometimes have to cover on their own. Anytime we work with someone who shows a passion for audio, we want to keep working with them!

I wish that – yes, as a sound guy – I’d taken more computer science and coding classes when I was in school, and maybe taken a path to become a coder. If you’re in school and interested in audio for games, that is definitely a path to consider, every studio seems to need more sound programmers.