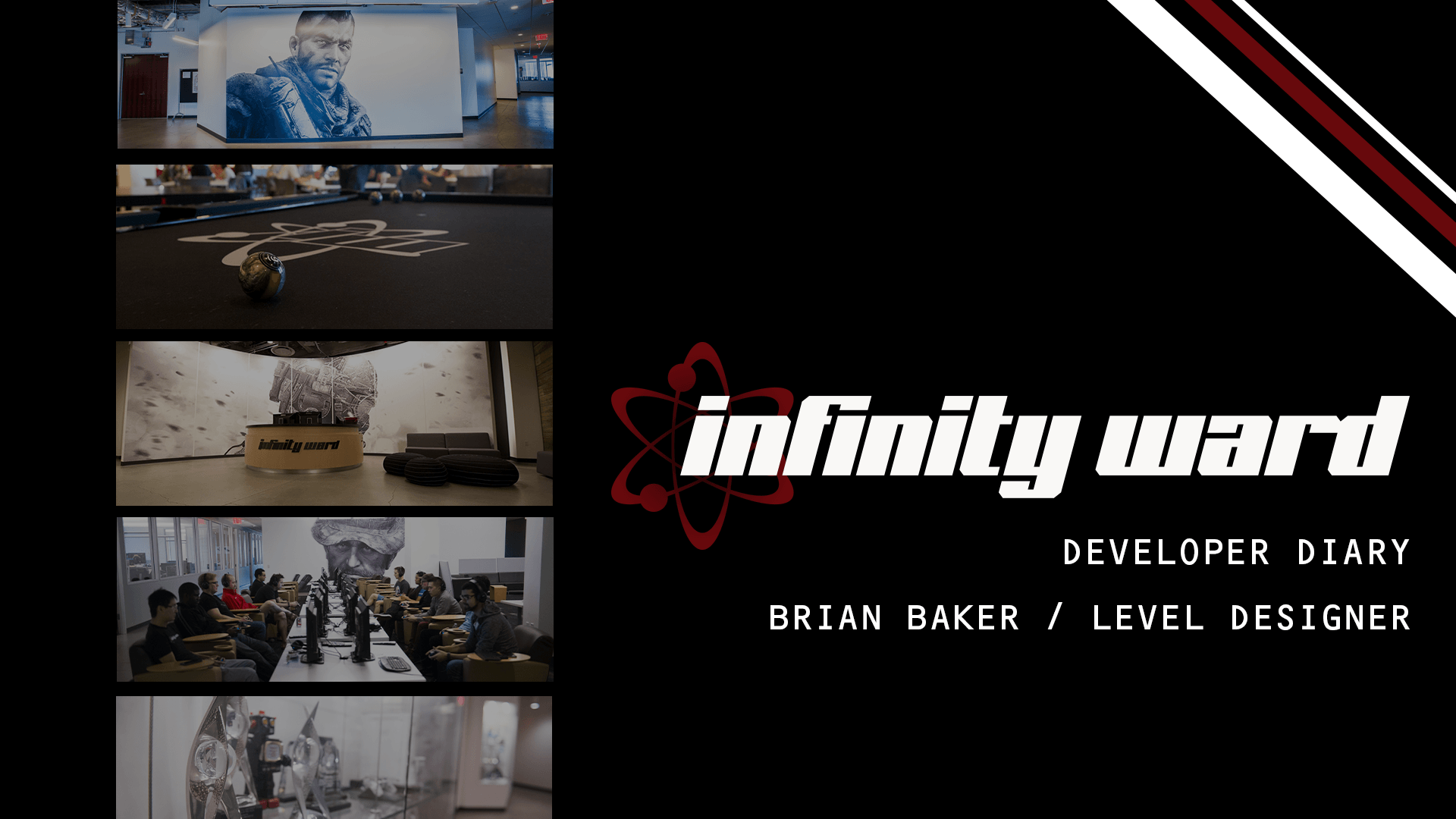 This week, we chat with Brian Baker, co-creator of 2v2 Gunfight mode. Brian peels back the curtain and gives an inside look on how Gunfight was made along with some insight on getting into Level Design.

Hi, I’m Brian Baker and I am a Level Designer on the Multiplayer team.

Level Designers are responsible for all things map-related. Such as taking a map from a concept or idea to a gameplay ready block out. We place player collision, game mode objectives, spawn locations, and AI pathing to the maps. We optimize performance and fix bugs. We do a lot of playtesting and give/receive a lot of feedback. We also support the Art, SFX, and Audio teams while they work their magic on the maps.

I joined IW in 2010, but my first job in the industry was in 2006. When I was in college, I got a summer job as a temp QA tester over at Activision in Santa Monica. My first project was Call of Duty 3. After that project, I actually quit so I could finish college (I had one semester left). But as soon as I did, I went back to QA testing. I worked on basically everything that came out of Activision between 2007-2010. (Guitar Hero, Tony Hawk, Call of Duty, Spider-man, etc) Then I got an opportunity to work onsite as QA at IW during MW2. After that game shipped, they hired me on full time. I worked on MW3 and started to mess around with the level editor “Radiant” in my free time and was able to move up to design during Ghosts.

I’m gonna be honest, I got into this industry because I wanted an excuse to play videogames all the time. It’s worked out! But I also like to read, watch shows/sports, and play board games with my friends.

Tell us about a piece of work that you are most proud of.

I’m most proud of 2v2 Gunfight. My good friend and co-worker Dave Mickner and I designed and prototyped out the mode in our free time. Dave scripted the mode and I designed the initial set of maps: King, Stack, Speedball, Docks, Atrium, and Gulag Showers. We had a blast making it, so much so we had to continually tell people (including Dave and me) to stop playing 2v2’s and get back to work.

What advice would you give to someone wanting to get into Level Design?

Play lots of games! For me, I grew up playing a lot of Counter-Strike, Team Fortress, and Halo. Plus, all my time as a QA tester on CoD games really helped me figure out multiplayer level design and helped me build my own style of design philosophies and principles. Which helped me immensely when I first started making maps and still influence my maps to this day. Also, get lots of feedback and iterate, iterate and iterate.

I wish I messed around in level editors like Hammer (source) when I was younger. I feel like I could have learned so much back then. Today, we have amazing game development software like Unity and Unreal that’s free and highly documented with loads of tutorials and classes. So, get out there and learn to make games, no excuses!

Check back next week, when we will be talking with one of the technical masterminds behind the photo-realistic charcters in Modern Warfare, Bernardo Antoniazzi - Principle Technical Artist.